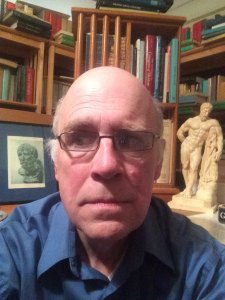 My primary expertise is back-of-the-book indexes and ‘indices locorum’ for scholarly monographs, commentaries, and textbooks in Classical Philology: Ancient Greek, Classical Latin, also Ancient Philosophy and Ancient History. If there is any demand, I can proofread Latin and Greek texts and ‘apparatus critici’: I can find unmetrical lines ‘on the fly’ in any ancient poet except Plautus.

A secondary interest is Early Modern English Drama. I spend my spare time at the Blackfriars Playhouse down the street from my house and have developed a solid amateur knowledge of Shakespeare and other English playwrights of his age. I can therefore gladly and competently index editions of these dramatists, or monographs on them.

Caveat: Whether dealing with ancient or relatively modern authors, critical theory is not my strong point.

TRAINING AND EXPERIENCE – INDEXING:
I did a six-month apprenticeship at Coughlin Indexing Services (indexing.com) in 2004-05, during which I indexed between fifty and a hundred books and journal articles in a wide range of subjects, none of them listed above. I was not kept on after my probationary period because I was not quite fast enough, but there were no problems with the quality of my work. Of course, my speed in pages per hour is not your problem, since indexers charge by the page, not per hour. Before and since then, I have earned my living teaching Latin, Ancient Greek, and a bit of Shakespeare, Geography, and Geometry, in various colleges, high schools, and middle schools, and also done some technical writing. In the years since my apprenticeship, I have indexed a few books in my spare time, including:

I am now retired from teaching and can devote all of my time to your indexing project. I am particularly interested in indexing books like #4-5 and #8-10 above, books I would have bought and read when they came out if I hadn’t already seen them in page proof. I can charge less per page for such books, especially if you promise to send me a free copy when the book is published.

SUBJECT-MATTER QUALIFICATIONS:
I earned my PhD in Classics (Latin) from the University of Virginia with a dissertation on the Augustan love elegist Sextus Propertius. I have since published 47 articles or notes in journals: 37 on Roman authors, 9 on Greek authors, 1 on Edith Wharton. Most are textual or exegetical: attention to detail is one of my strong points. Most are available in PDF on my website (curculio.org/pubs4.html), along with numerous on-line-only notes that will be included eventually in larger works. I blog on a variety of mostly-classical subjects at curculio.org and tweet as @Curculiunculus. My blog-site also includes the first classical texts with ‘apparatus criticus’ ever put on-line, starting with Juvenal in 1998, as well as some index-like things such as a cross-reference page showing which of 25+ commentators and translators have covered which of Seneca’s 124 ‘Epistles to Lucilius’ (curculio.org/Seneca/em-list.html). I hope to turn the latter into a database at some point. (I worked as a database programmer many years ago, and still use my skills on my website.)
Indexing Software Specialties:
CINDEX indexing software
Word

ASI's Best Practices for Indexing guide is available to read or download here.

The Benefit of Networking with Indexers

Want to talk about indexing stuff? It takes another indexer to understand your work. And indexers are the best at answering your work-related questions, whether it's about your software or just how to handle that tricky name. Join the ASI Discussion List to post your questions, hear responses from other indexers, and benefit from the knowledge of the community. Visit this page to join the list and participate in your community.